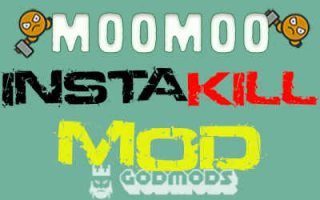 Download this MooMoo.io Insta Kill Mod or the release of Project Nova won’t work! (It’s going to be a different release package)

Sourcecode is clean, you can read it yourself :p

*We are not affiliated with the moomoo.io developer, or any moomoo development. Use at your own risk, sourcecode can be seen and reviewed. We believe that the sourcecode will not damage your computer. It is simply redefining and defining. We aren’t responsible for any damage this script causes, nor any derivatives of this Project*

Attention: None of the mods and this MooMoo.io Insta Kill Mod published on our pages belong to our website. Due to the nature of the mods, they are developed by independent developers and published on the internet. As God Mods we compile the most popular mods on a single page for any io game. We do not accept any responsibility for any possible unwanted conditions due to the use or download of these mods. Users should download these at their own risks and we never store any part of these mods in our databases.